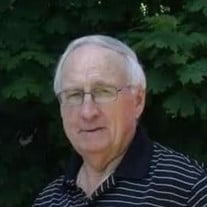 It is with saddened but full and thankful hearts that we the family announce the peaceful passing of Malcolm “Malkie” Joseph Nemis of New Waterford, on February 2, 2022, in the Palliative Care Unit, of the Cape Breton Regional Hospital, with his wife Anna by his side. Born in New Waterford he was the son of the late James “Cookie” and Catherine (MacDonald) Nemis. Malkie was a Faithful Catholic and spent time as a board member at Mount Carmel Parish, New Waterford. Malkie was a proud graduate of St. Francis Xavier University, obtaining his Bachelor of Arts in Education in 1960. Later achieving his Master of Education. While in university he obtained a permissive license to teach grades 4-6 at Arisaig School, Antigonish. He then returned to Cape Breton to begin his long career as teacher, vice principal, and principal. Malkie encouraged and guided all his students, believing that no one should be deprived of an education. He was instrumental in shaping the school systems of Arisaig, Miners Memorial and Mount Carmel schools. During the following years programs of adjusted and special classes known as the Joy Program were started and subjects were taught. Malkie encouraged and guided these students and was instrumental in keeping many a boy or girl in school that would otherwise be deprived of a rightful place in a good educational setup. He was groundbreaking in the first extracurricular studies in these schools, obtaining grants to fund sports, art, music, and drama, Encouraging the community to come together and support these programs and the students. He was also the night school administrator for many years. Sports were also a huge part of Malkie’s life. He enjoyed watching and playing, Hockey, Baseball, and golf with a notable accomplishment of 2 registered “hole in one” during his winters in Florida. His heart was most happy when the family would spend time out “Daland ” in George’s River. Heaven’s gardens will never look so good with Malkie tending the rows. He took great pride and spent countless hours in his garden, readying himself for the gardens in God’s kingdom one day. You could also find him picking various berries around the property, tinkering, fixing, building, enjoying many sun-soaked hours by the water. Later he could be found asleep in his chair in the cabin while a game of baseball or hockey would watch him “rest” with his granddaughter Tara close by waiting for her chance at the remote. Together Malkie and Anna built a beautiful life. Their hard work and dedication to each other and their family gave a wonderful platform for their children to build a life, and pass it on to their own families. Spending time in New Waterford and George’s River, and in their later years their winters in Florida attributed to so many amazing memories and stories shared between them, Family and Friends. Malkie is survived by his wife of 61 years, the love of his life, Anna (Pembroke), his daughter Charlene (Terry) Bates, sons Joey (Cindy), Blair (Annemarie), and Malcom (Tina), 11 grandchildren, and 7 great grandchildren. He will also be greatly missed by his sisters, Shirley (Archie MacIntyre) and Lynn (Jim Newman); and brothers, James (Emily), Denis, Colin 'Nick' and Cyril (Raylene). Besides his parents he is predeceased by a daughter in infancy Mary Theresa, Sisters in law Shirley, Jessie, and Eileen. He is also recently predeceased by his close friends Yogi Muise and Fraser White, The three “Fathers of George’s River” who built the log cabins by hand milling and cutting every log themselves. The family would like to extend a heartfelt thank you to the angels at the Palliative Care Unit at the CBRH . Donations in Malkies memory can be made to the Hospice/ Palliative Care Unit. Cremation has taken place, a Funeral Mass will be held at 10:00am on Saturday, May 14th at St. Leonard Catholic Church, 3180 Mt. Carmel Ave., New Waterford. Funeral arrangements are under the direction of Sydney Creamatorium. Online condolences may be sent to their webpage at www.sydneycremation.ca.

It is with saddened but full and thankful hearts that we the family announce the peaceful passing of Malcolm &#8220;Malkie&#8221; Joseph Nemis of New Waterford, on February 2, 2022, in the Palliative Care Unit, of the Cape Breton Regional Hospital,... View Obituary & Service Information

The family of Malcolm Joseph "Malkie" Nemis created this Life Tributes page to make it easy to share your memories.

It is with saddened but full and thankful hearts that we the...

Send flowers to the Nemis family.